Theosophy and the Arts: Texts and Contexts of Modern Enchantment

This is the second conference of the international research network Enchanted Modernities: Theosophy, Modernism and the Arts, c.1875-1960 funded by the Leverhulme Trust. The Network’s first conference, ‘Enchanted Modernities: Theosophy and the Arts in the Modern World’ held at the University of Amsterdam in 2013, mapped Theosophy’s varied influence on painting, sculpture, applied and decorative arts, music, architecture and other art forms in the period c.1875-1960. It focused on the translation of Theosophical ideas, especially those of key figures in the Theosophical Society in this period, such as Helena Petrovna Blavatsky and Annie Besant, into material, visual, and audible form.

Theosophy was, without question, a major source of inspiration and influence for artists in the modern age. Our second conference, to be held at Columbia University on October 9–10 (Friday-Saturday), 2015, seeks to locate that influence within its cultural contexts and to trace the textual practices and philosophical, historical, and cultural traditions that produced and sustained Theosophy. This conference also seeks to explore the wider contexts of Theosophy’s influence in the arts. How can we locate Theosophical arts within broader cultural and social histories of the period c.1875-1960? Interest in Theosophical ideas was often far more than an aesthetic inclination. For many, Theosophy was useful precisely because it gave social and political purpose to the arts. Beyond these conscious commitments, how might we go about understanding the historical specificities of Theosophical arts? For example, how might we understand these arts in relation to class, gender and race, to momentous historical events such as the First World War, to geopolitics, or to the local politics of place?

In the first place, the writings of Blavatsky, Besant and other thinkers influenced by Theosophy are worthy of attention in their own right. How should we read these texts as contributions to modern (re)enchantment? How did these writings come to influence artists and thinkers in such a wide variety of fields, and what was the nature of that influence? Secondly, we should account for the textual life of Theosophy beyond its official publications: writers of fiction and poetry were influenced by Theosophical ideas, and artistic figures of all kinds produced their own texts, such as manifestos, which extended the textual reach of Theosophical enchantment. In addition, we might ask how Theosophical ideas made the transition between elite and popular forms of writing, for example, to genres such as science fiction and fantasy, and what this might tell us about the location of esoteric thought in modern culture. Thirdly, we should note the rapidly expanding social movements influenced by Theosophical writings, such as vegetarianism and animal anti-vivisection. How did these movements shape life practices and bring about cultural transformations? Finally, we also invite reflection on the entanglement between Theosophy and the arts on the one hand and science, technology and medicine on the other. The period c.1875-1960 was one of momentous change not only in the arts, but also in the sciences: how might we trace the connections between artistic and scientific practice which formed in relation to Theosophy and related movements?

Professor of History of Hermetic Philosophy and Related Currents

"Claude Bragdon and the Art of Invisible Dimensions"

Associate Professor in the Department of Communication Studies

"'My Theory of Soul Atoms': Theosophy and Occult Mysticism in Sadakichi Hartmann's Aesthetics"

School of the Museum of Fine Arts, Boston

Professor of English and Comparative Literature

"Henrietta Frances Lord - a Translator of Ibsen for the Theosophical Movement"

Norwegian University of Science and Technology

Assistant Professor of Historical Studies and the Study of Religion

“Every Picture Tells a Story: Édouard Schuré’s 'The Great Initiates': Theosophy, Text, Context, and Influence on the Visual Arts in France”

Professor of Sociology of Religion

“Enchanting the Farm: Anthroposophy and the Origins of German Organic Agriculture”

School of the Art Institute of Chicago

Professor of History of Hermetic Philosophy and Related Currents

“The Colors of Conversion: Swedenborg, Theosophy, and Transcultural Mysticism”

“Images of Buddha and Christ in French Symbolist Art: Interpreting East and West through a Theosophical Lens”

“The Reception and Propagation of Theosophy in China”

“Theosophical Individualism and the Politics of Neutrality”

“The International Lodge Reconsidered: The Theosophical Network and its Impact on Japanese Interbellum Modernity”

“Transmutations of Theosophy in Russian and East European Literary and Philosophical-Scientific Contexts (c.1880s-1950s)”

University of London School of Oriental and African Studies

“Fables of Enchantment: Spiritualism, Anarchism and the Politics of Affectionbetween Women in Spain and Latin-America”

“Kandinsky, Boccioni, and the Ether in the International Culturesof Science and Theosophy”

University of Texas at Austin 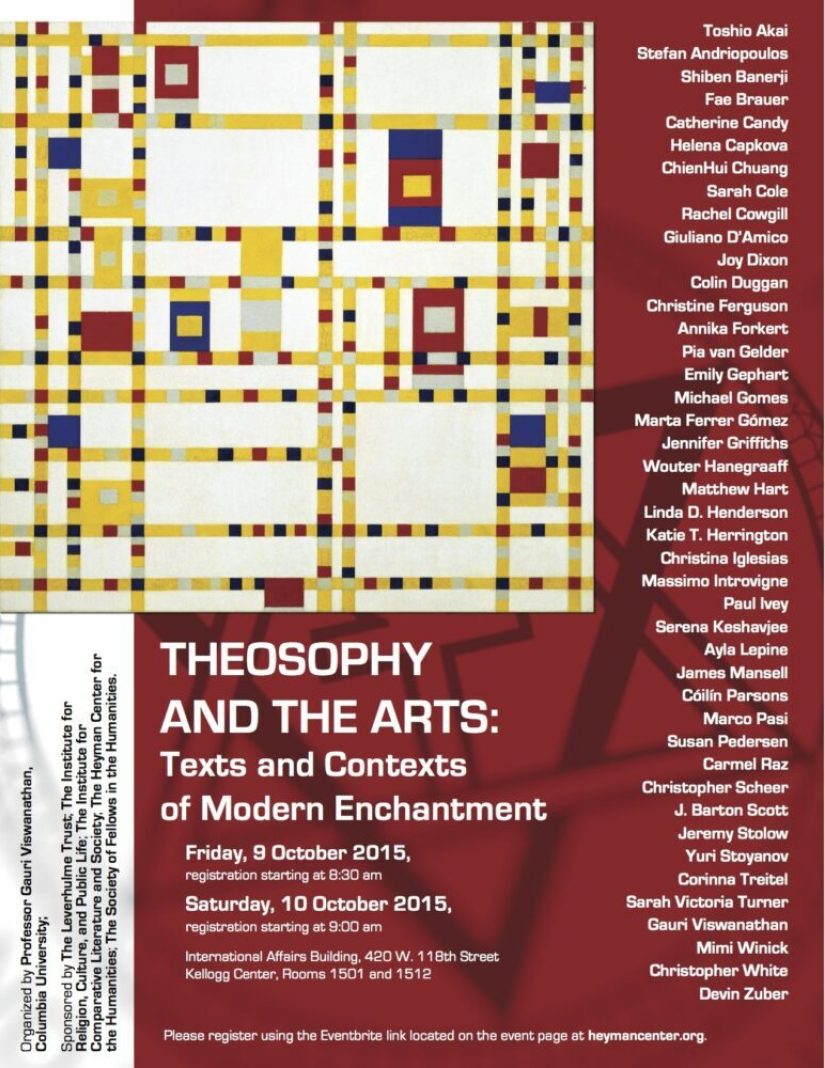